This article was originally published on the website of Table Stakes Europe, a performance-driven change management initiative for local and regional news organisations, supported by the Google News Initiative Digital Growth Programme. The article is also available in French, German and Spanish.

The powerful insights gained from broadening one’s perspective can elude many people in today’s news organizations whether they are in the newsroom, marketing, technology, HR, other key functions or even the C-suite of top bosses. Most people most of the time – especially in the midst of intense, 24/7 news cycles – spend their time on what, in Table Stakes Europe (TSE), we call the dance floor: the crucially important daily tasks needed to cover news. Notice this says “crucially important”: without ‘dance floor’ effort, the news doesn’t get published.

However, if all time is spent on the dance floor, none of the real changes needed to adjust news to 21st century realities will happen. That’s why we encourage TSE participants to ‘get up on the balcony’ – to intentionally get off the dance floor to gain perspective on ‘what is actually going on’ within and beyond their news enterprises.

So, let’s get up on the balcony and look at the external marketplaces in Europe. For example, let’s take a balcony perspective of these two images: 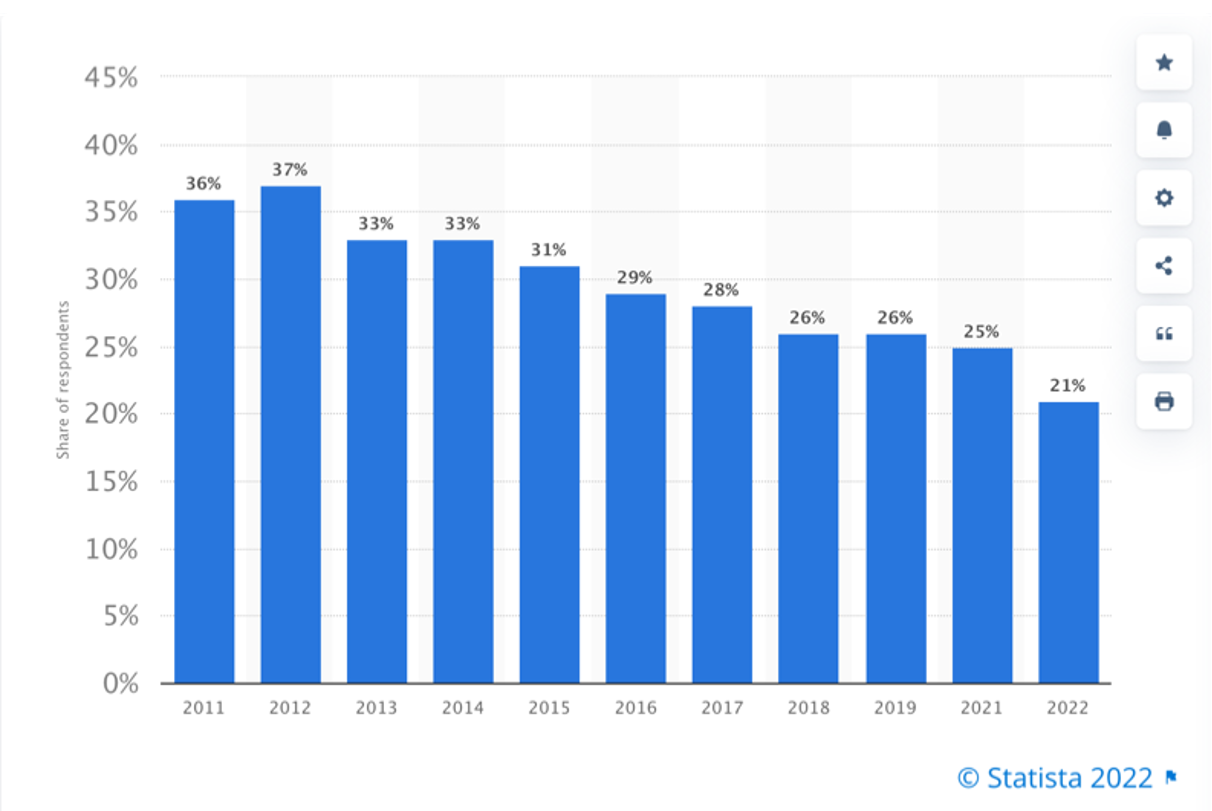 In the first, we see an older man enjoying coffee while reading a newspaper. In addition, if we think deeply from the balcony perspective, we also see habit: this man does this every morning.

In the second, we see a dramatically dropping percentage of people across Europe who consumer print media. 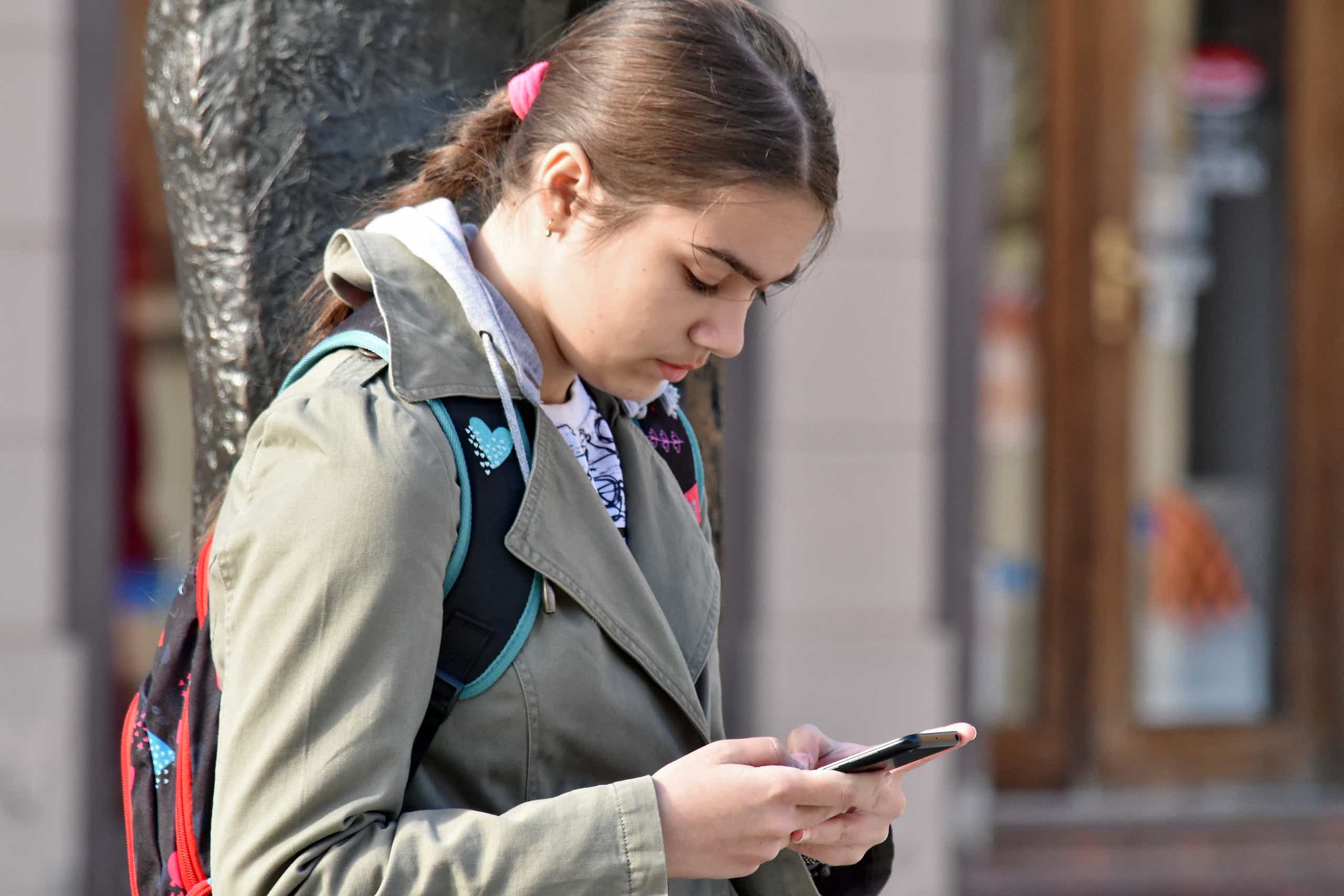 From a balcony perspective – including looking at persistent research data and many years of Table Stakes in Europe and the US across hundreds of news enterprises, we know that this young woman likely spends more than 6 hours a day on screens yet if she visits a news site, she typically does so for less than a few minutes.

Unlike the older man, she does not have an engrained HABIT of consuming news, especially local news. And, if news enterprises choose to care about her, they must win a battle for her scarce time and attention. They must deliver content relevant to her life and do so when she’s available to look at it. They must take steps to build her habit of news consumption.

We also know he will inevitably die – and take his positive cash flow with him.

We also know that local, regional and national European news enterprises who fail to provide the young woman with a quality product experience that builds her habit of news consumption will also die and go out of business as a consequence of this man – and others like him — dying. It might take another 5 to 10 years. It might take only, say, 3. But it will happen.

When we started the third round of Table Stakes Europe (and many thanks to Google News Initiative for its ongoing support as well as WAN-IFRA and all the courageous teams who participate), we had a series of ‘get to know you’ zooms with the teams. Together, we explored shortfalls and difficulties as well as opportunities the teams might use for the performance challenge that sits at the heart of the TSE experience. Most of the TSE news groups indicated how important it was for the sustainable future of their enterprises to attract and retain “younger” audiences – to in effect, win this young woman’s time and attention.

So, we asked, “What do you mean by younger?”

15 years ago when I founded the original challenge-centric journalism transformation effort (now called Media Transformation Challenge at Poynter), participants recognized from the balcony that “younger” audiences had profoundly different media habits from “older” people. Often, this was described as “if the news is important, it will find me”. In 2007, though, “younger” meant folks in the teens and twenties.

When we asked what TSE teams meant by younger in the autumn of 2021, the responses ranged as high as folks in their late 40s to early 50s. So, go ahead and replace the image of the young woman with a 40s-to-50s year old woman: “younger” today is much less about age than it is about information consumption habits. Now look again at the percentage of Europeans who consume printed media.

Look, here’s the situation all news media (and especially local and regional) confront (and, while anyone reading this might wish it were not true – it is true): unless and until news enterprises build habits of consumption among people from their teens through their 50s, those news enterprises will go out of business.

What else do we know from Table Stakes in Europe and the US? We know that when news enterprises persist in print-oriented skills and approaches, print-oriented work flows, and print-oriented output, they FAIL to build habits in “younger” people who now can be as old as in their 50s. We know that the deeply engrained news enterprise approach of providing general news and information to the general public does not work in the 21st century for any audience other than those who prefer print.

We know that when news enterprises persist in pouring resources into print – when they work all day toward the evening ‘print close’, and only then — late at night when relatively few folks are on their mobile phones or computers — put print-focused content on their websites, that content fails to attract or retain people who seek news and information on their mobiles and computers. The data show this. And, these bad results only improve marginally when, after the print close, content is thrown over a silo-wall to the ‘digital desk’ to pretty up the print content as best as possible.

Put differently, the quality of the news product on mobile/computer is poor and mediocre. It doesn’t work. It doesn’t succeed. It is ignored.

We recently asked the round 3 TSE teams, “Would you buy a 1970s East German Trabant car today? Would you purchase any automobile that fails to include the technology, features and functions car owners have come to expect in 2022?

No. You wouldn’t. (Unless you are a hobbyist of course:-)

Which means building habits of news consumption among people from teens through 50s starts with a quality product. The newsroom are responsible for product quality. Not marketing; not HR; not the C-suite. Which is why we say in TSE, “the newsroom IS the business” (a dramatic change from printed papers when the last thing any self-respecting journalist would say is ‘I am the business’).

Yes, the newsroom needs help from technology to produce a quality product. And, once that happens, then help is needed from marketing and others to convert the increasing number of visitors into regular, habitual users who can be monetized.

But too many local, regional and even national news enterprises make the mistake of starting with marketing – of offering low-to-no introductory prices to attract digital subscribers – only to find those folks churn at extraordinarily high rates. Why? The product is bad. Habit does not happen. 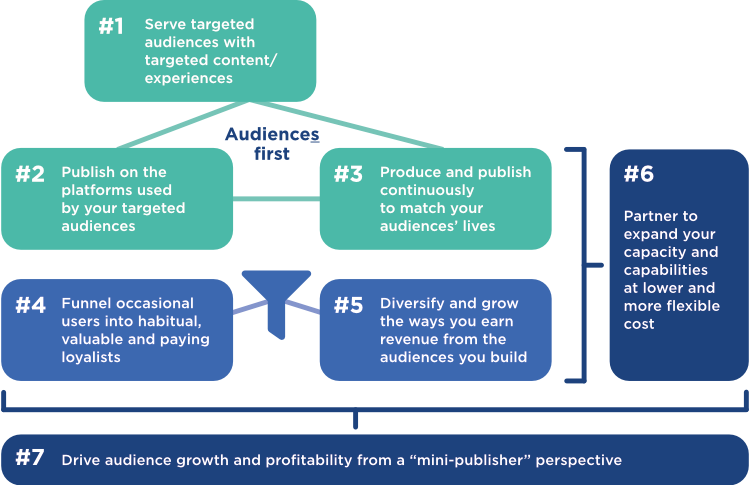 We also know how newsrooms can create and sustain a quality product and experience. Use the 7 core table stakes which center on “audienceS and digital delivery first, print later and better”. As happened in the 1st and 2d rounds of TSE, round 3 teams have witnessed substantial increases in traffic, engagement, habit and digital subs (as well as higher CPM advertising) when they use:

Illustrations from round 3 include:

“OMG this is working!” reported The Conversation UK (part of the Australia-begun by now global group who connect readers to the best of academia scholarship and insights). To build an audienceS-orientation among their editors (and academics), The Conversation UK chose to launch “Quarter Life” – content specifically aimed at helping young UK professionals solve every day needs, interests and problems. Compared to the average of all content produced at The Conversation UK, traffic, engagement and share of the young professional UK market all rose dramatically.

But it only works when journalists – supported by circulation, ad sales, technology, HR and the C-Suite – make the effort to learn and practice audienceS-focused and digital/technology skills, behaviors, cross-silo relationships and workflows aimed at building habits among the now vast numbers and percent of people who prefer digital means of consuming information. And when they regularly look at data to see what is working and what is not.

For that reason, we now regularly ask TSE teams, “How many people in your newsroom are practicing table stakes methods?”

At this mid-point in TSE round 3, newsroom participation ranges from 10% to 40%.

So, why is it that more newsroom folks don’t participate? Mostly, it is because they are working so hard to ‘get the paper out’.

There are two major methodologies in TSE:

Performance-driven change requires committing to specific goals and outcomes, then learning-by-doing; learning-by-performing. Yes, training can help. But, any editors-in-chief or CEOs or HR executives or anyone else who think that training is enough will fail. And, again, this difficult lesson has been learned by TSE teams who have tried to ‘train their way to success’.

We also know that the economics of digital news consumption per user historically is much lower than the economics of print subscribers like the old man enjoying his coffee. There are many reasons for this – but the number one reason ties to the original sin of legacy news providers. When the Web hit twenty years ago, print news providers gave their content away for free.

What did that communicate to the digital user? Get up on the balcony when you ask yourselves that question.

Having begun with a price of zero, news publishers nervously and anxiously worry about “charging too much”. Yet, consumers who build habit – again look at the older man enjoying his coffee – will in fact pay higher prices over time.

Look again at the percentages of Europeans who consume printed media.

Whether you like it or not. The clock on the old man enjoying his coffee and newspaper is ticking.

It is time for you to get in the game of 21st century news and to do so before “younger” means people in the 70s.

We are thrilled to be working with the round 3 TSE teams leading their news enterprises into this insistent, inevitable future. And we encourage others of you who have not yet participated in TSE to apply today.

Because the clock Is ticking.

Interested in joining the next edition of Table Stakes Europe? Fill in the Expression of interest form here!

Register For This Site